"Hi Drew, I'd really like to talk to you, but there are many far more important people here for me to talk to right now"

In 1987, Arthur Carter began publishing The New York Observer, the salmon-colored broadsheet covering NYC politics, show business, gossip and media. The Observer's first editor was Carter's lawyer John Sicher, followed by SPY magazine co-founder E. Graydon Carter, who left to edit Vanity Fair, and was replaced by SPY's Susan Morrison. Journalist Peter W. Kaplan became the Observer's new editor in 1994 and one of his first objectives was to line up four artists to create the newspaper's weekly covers each month. Peter knew my work from SPY and first called me with an assignment to draw senator Al D'Amato. We instantly hit it off, realizing we shared a mutual love of old comedy films, Frank Sinatra and MAD magazine. Peter soon lined up the great caricaturists Philip Burke, Victor Juhasz and Robert Grossman as his other cover artists. He referred to the four of us as his "Murderer's Row", referencing the unbeatable 1927 New York Yankees starting lineup. Working directly with Peter, The four of us would create weekly covers for the NY Observer (the NYO), for the next 15 years, with Barry Blitt drawing the small B&W cover caricatures. 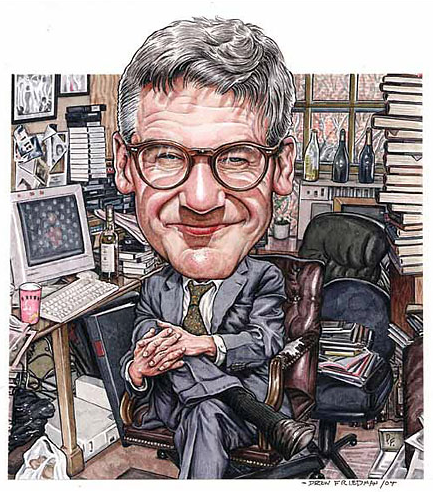 My portrait of NYO editor Peter Kaplan in his infamous office,
drawn for his 50th birthday and published in the NY Times

In 2006, twenty five year old real estate developer Jared Kushner purchased the Observer and Peter Kaplan continued on as editor. I would create over 50 covers over the next 10 years under the Kushner regime.

When I first talked with Peter about Jared, he seemed excited about the future prospects of the NYO with this young, wealthy new publisher, equating him to Orson Welles as the young Charles Foster Kane, purchasing a money-losing newspaper and injecting new life into it.

It didn't take long before I started picking up on slight pauses and hesitations during our conversations about  how things were going, and Peter's pauses and hesitations spoke volumes. I sensed that things were perhaps not going according exactly to plan. I never pressed Peter for any details, we mostly talked about the Marx brothers, Jerry Lewis, Jack Benny, Popeye and Joan Blondell, but the writing seemed to be on the wall. Peter, who was passionate about the NYO,  seemed increasingly frazzled during each subsequent phone conversation.
The first assignment Peter gave me under the new Jared Kushner
regime was to draw Sacha Baron Cohen for a cover story, also in
the guise of his two characters, Ali G. and Borat
(The Borat film was about to be released).
When the issue hit the stands the following
Wednesday, a very excited Peter called me to say
that Jared, a huge fan of Ali G., loved the cover and
wanted to purchase the original art for his younger
brother Joshua as a gift. Peter also shared with me
(in a more subdued voice), that this was
"finally some really good news". Peter acted as Jared's
liason and we agreed on my fee, and at the end
of the conversation he said "Drew, thank you... thank you... thank you",
as if I had done him a tremendous favor. 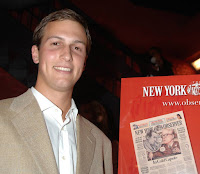 In 2007, the NYO switched from the large broadsheet format to a smaller, trimer, tabloid size, yet still retained it's salmon hue. The first issue of the new Observer featured my illustration of a Hillary Clinton floaty-head on it's cover, silhouetted from a larger drawing I'd created for an earlier issue. As a publicity stunt, the morning the issue hit the stands, the young publisher and the seasoned editor both hawked copies ("extry, extry..."), of the new tabloid outside Grand Central station as an Observer photographer snapped away: 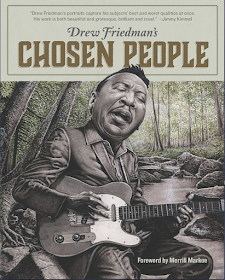