Aunt Bee, or Not Aunt Bee?


A photo has circulated on various "when they were young" and "urban legends" sites with the claim that it's a young, hot and pouty "Francis Bavier", aka "Aunt Bea" of The Andy Griffith Show. The caption claims the photo is from "around 1936", but It's actually a publicity still of actress Gloria DeHaven from 1949 for the film Yes Sir, That's My Baby which co-starred Donald O'Connor.

Dehaven, born in 1925 was 24 when the photo was taken. Frances Bavier, born in 1902, would have been 47 in 1949 and never posed for any "Cheesecake" photos. When she was younger she was a Broadway stage actress:

Another clue that the claim is bogus: the real spelling of Bavier's first
name is "Frances", not "Francis", and her beloved character's name on
the show was spelled Bee, not Bea, (a common mistake), as captioned
with the photo:

The Laureate of American lowlife
Charles Bukowski was born in Germany in 1920, the only child of an American soldier and a German mother. At the age of three, he came with his family to the United States and grew up in Los Angeles. He attended Los Angeles City College from 1939 to 1941, then left school and moved to New York City to become a writer. His lack of publishing success at this time caused him to give up writing in 1946 and spurred a ten-year stint of heavy drinking. After he developed a bleeding ulcer, he decided to take up writing again. He worked a wide range of jobs to support his writing, including dishwasher, truck driver and loader, mail carrier, guard, gas station attendant, stock boy, warehouse worker, shipping clerk, post office clerk, parking lot attendant, Red Cross orderly, and elevator operator. He also worked in a dog biscuit factory, a slaughterhouse, a cake and cookie factory, and he hung posters in New York City subways.
Bukowski published his first story when he was twenty-four and began writing poetry at the age of thirty-five. His first book of poetry was published in 1959; he went on to publish more than forty-five books of poetry and prose, including Pulp (Black Sparrow, 1994), Screams from the Balcony: Selected Letters 1960-1970 (1993), and The Last Night of the Earth Poems (1992). He died of leukemia in San Pedro in 1994.

This is my newly completed portrait of Charles Bukowski, who I never met, although I illustrated a series of his short stories ("Notes of a Dirty Old Man") for High Times magazine in 1993 when he had (briefly) become a regular contributer. (Robert Crumb has also drawn Bukowski and his stories on numerous occasions) Bukowski was very pleased with my depictions of his sad characters and sent this letter to the editor, Larry "Ratso" Sloman: 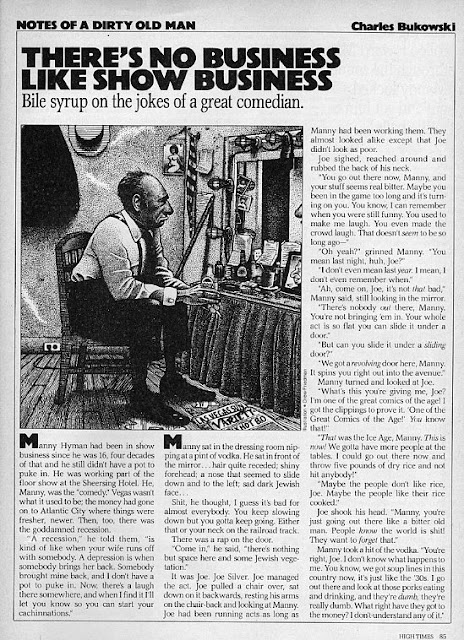 
On March 24, the Thomaston Place Auction Galleries in Thomaston Maine will host a one-day auction featuring "The Lost Drawings of George Wachsteter", a mind-boggling collection of original art spanning four decades from the estate of Wachsteter, at one time one of the most celebrated caricaturists of the mid-twentieth century,  now all but virtually forgotten:

Thanks to the efforts of a few longtime admirers of his incredible art, among them Leonard Maltin, Mike Lynch, yours truly and the caricaturist Zach Trenholm, who made a pilgrimage to Elmhurst Queens to visit the aging and forgotten Wachsteter in his final years,  George Wachsteter's work will receive the attention and inevitable revival it so richly deserves, (and hopefully an anthology). This is my blog tribute to Wachsteter from 2012:
http://drewfriedman.blogspot.com/2012/03/lost-art-of-george-wachsteter.html

I'm showing just a sampling here (in no particular order) of some of the original Wachsteter caricatures and illustrations that will to be auctioned on the 24th. Full descriptions, including names, dates, and publications, as well as rough art and printed covers can be found on the auction catalog site:
http://auctions.thomastonauction.com/asp/searchresults.asp?st=D&sale_no=302&ps=25&pg=28&view=view1#103000

The majority of work represented in the auction was created for the weekly cover of the New York Journal-American Pictorial TV section. When the Journal- American ceased publication in the late sixties and Wachsteters vision faltered, his career virtually came to a halt.

Looking at his work, you might assume that George Wachsterer was perhaps greatly influenced by the legendary Al Hirschfeld, who Wachsteter frequently alternated with at the New York Times in the forties, but consider that they were each contemporaries and both quite celebrated in their day. They were also both clearly influenced by the great caricaturist Miguel Covarrubias. Enjoy!

My thanks to Martin Gostanian