This is the latest in my ongoing series of portraits of the legends of comic books, the renowned caricaturist and illustrator, the amazing Mort Drucker. Mort has been a MAD artist for going on six decades, and I'm proud to count him as a friend (OK, full disclosure, we've actually only met once, but do occasionally correspond, Mort, a personal hero always being very complimentary of my artwork). This is Mort posed in his studio, at least my imagining of his studio:

"I hope people now refer to the game as "Berle-ing"

In 1950, Milton Berle, aka "Uncle Miltie", was the host of the most-watched show on television, Texaco Star Theatre and was by far the most popular star on television, in fact he was known as "Mr. Television". Ten years later Milton Berle was hosting Jackpot Bowling. 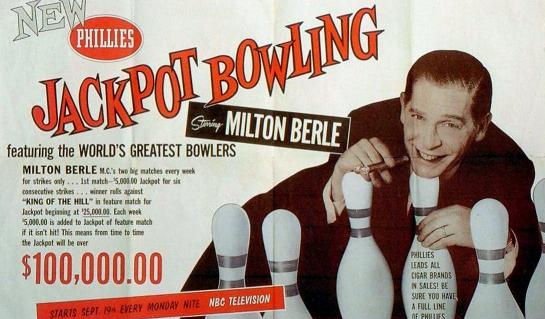 Jackpot Bowling had been on NBC TV for three years before the producers had the brilliant idea of hiring Uncle Miltie as MC for comedy relief, delivering an opening, rapid-fire bowling-joke oriented monolog before turning things over to announcer Chick Hearn who called the matches between the professional bowlers. Berle would return and kibbitz with special guest stars, including Buddy Hackett, Debbie Reynolds, Bobby Darin, Jack Dempsey, Diana Dors, The Ritz Brothers...
Milton Berle welcomes The Ritz Brothers

... all bowling for their favorite charities, then later close the show with more bowling related jokes. The show, filmed at the Hollywood Legion Lanes in Hollywood actually garnered good ratings but after six months Milton Berle bowed out, perhaps due to a better offer... or due to sheer embarrassment. 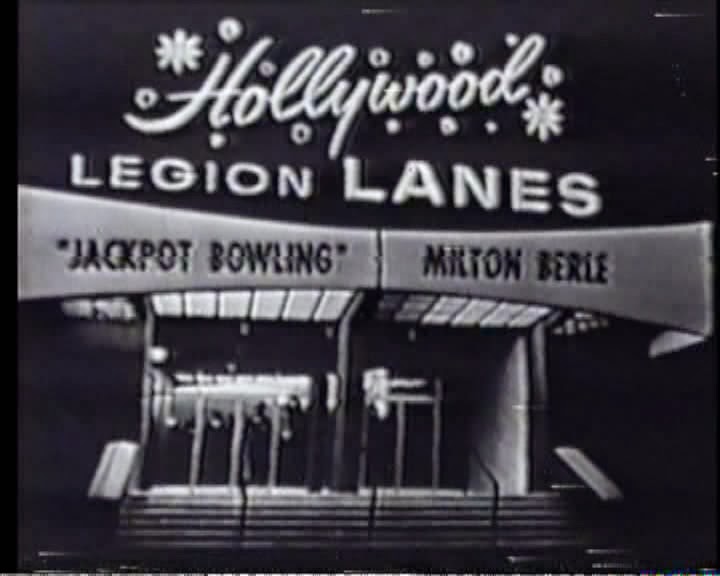 Who the HELL is "Dining at Melvyn's"?

"Dining At Melvyn's" was a large panoramic mishmash drawn by "The Rumba King", Cuban bandleader/caricaturist Xavier Cugat created when Melvyn Haber ("Mr. Palm Springs") opened the restaurant in 1975. Melvyn's continues to be a popular Palm Springs restaurant/tourist stop, and this piece featured many of the new "regulars", or at least 1975 Palm Springs regulars. A print of the art still hangs there above the men's room urinal. Some of the caricatures are clearly identifiable (thanks to his  basing them on Al Hirschfeld caricatures), some continue to baffle to this day. Cugat took his master list and the mystery to the grave with him in 1990. People have debated this for years.
The best I can make out:
Top Row: Possibly John Carradine, Abbey Lane or Charo (both Cugat wives), the artist himself-Cugat, Liza Minelli, Phyllis Diller, possibly Ernest Borgnine, or, a restaurant bouncer?, the following the most confusing of all: possibly Eddie Fisher and his latest squeeze, or, as some have speculated, restaurant owner Melvyn's "agent" with his girlfriend, although why a restaurant owner would have an agent is confusing, and finally possibly Melvyn himself?
Row 2: David Niven, Tony Bennett, Buddy Hackett, Liberace, Charles Bronson, Jerry Lewis (some had guessed Clark Gable, but ears way too small and he was long deceased)
Row 3: John Wayne, Hugh Hefner, Katherine Hepburn, Danny Kaye, Jackie Gleason, Barbra Streisand
Row 4: Richard Burton, Elizabeth Taylor, Sonny and Cher, Sammy Davis Jr. (??), Alfred Hitchcock (via Hirschfeld), Anthony Quinn, Frank Sinatra
Bottom Row: Rex Harrison, Kirk Douglas, Red Skelton, Bob Hope, Bing Crosby, Lucille Ball, Danny Thomas and Groucho Marx (what, no Zeppo who lived in Palm Springs?)
Posted by Drew Friedman at 5:23 PM 18 comments:

The Heartbreak Kid is 40!

"Elaine May directed it.

In early Dec 1972, The Heartbreak Kid was first sneak- previewed at New York's Sutton theatre (I attended) and soon opened to unanimous rave reviews. Vincent Canby in the NY Times summing things up: "The Heartbreak Kid is a first-class American comedy, as startling in it's way as was "The Graduate." It's a movie that manages the marvelous and very peculiar trick of blending the mechanisms and the cruelties of Neil Simon's comedy with the sense of F. Scott Fitzgerald. The film is an unequivocal hit".

And it was. The Heartbreak Kid would go on to set box office records at the intimate Sutton theatre with continuous lines around the block throughout the month until it opened widely.

Neil Simon's first rate screenplay was adapted from Bruce Jay Friedman's short story "A Change of Plan" which had appeared in the Jan 1966 issue of Esquire...

The story was about young man named Cantrow who marries and is off on his honeymoon to Miami Beach with his new bride, but upon arriving quickly falls for and pursues a young beautiful WASP girl. The story ends with Cantrow attending his second marriage ceremony and actually showing interest in his new mother-in-law (the film doesn't go there)

Read "A Change of Plan" here:
http://www.tabletmag.com/jewish-arts-and-culture/books/954/a-change-of-plan
Neil Simon had been a long-time admirer of Bruce Jay Friedman's fiction. Simon had toyed for years with the idea of adapting BJF's novel "A Mother's Kisses" into a film, and would later adapt BJF's "The Lonely Guy's Book Of Life" into what would eventually become the Steve Martin comedy "The Lonely Guy" (co-starring Charles Grodin).  for a "Dialogue On Film" for the American Film Institute, Neil Simon commented:

Many critics, while being somewhat harsh towards Simon's earlier film scripts, cited his screenplay for "The Heartbreak Kid" as finally having an "understanding of character", rather than going for the easy laughs.

"The Heartbreak Kid" was Elaine May's second film as a director following her promising comedy (which she also wrote) "A New Leaf", in which she co-starred with Walter Matthau the year before. With "The Heartbreak Kid", she delivers the goods, finding her full comic voice as a director and the movie reflects her unique, dry, deadpan persona...
especially in the casting and performance of her daughter, a reflection of herself, 21 year old Jeannie Berlin who sounds and looks like a (slightly more zaftig) version of her mother. Some of the scenes and dialog between Charles Grodin and Jeannie Berlin even sound like Nichols & May Routines. Making her film debut Jeannie Berlin is perfect in the role of the nice Jewish girl/spurned bride Lila, funny, pathetic and finally sad and heartbreaking. She was deservedly nominated for a best supporting actress Oscar.

Neil Simon would later say in an interview that he imagined Lila in his script as attractive and only slightly befuddled (and less Jewish). There's also no indication that the first (nameless) wife in the original BJF short story is Jewish, unattractive or had any unpleasant (disgusting) habits (eating Milky Ways during sex, devouring egg salad with remnants seen around her mouth, smearing her face with gobs of sun cream, etc).
Simon had Diane Keaton in mind for the part of Lila but Elaine May had her own ideas. He felt that if Lenny had dumped a more attractive Lila (Diane Keaton) for the shiksa, it would have shown the audience an even darker, colder side of  Cantrow,  leaving his new wife on their honeymoon on merely a whim. Elaine May wanted her daughter for the role and that was that. No matter, all agree that Jeannie Berlin practically steals the film.
By 1972, Charles Grodin had been acting (and directing) for over a decade, mostly in NY theatre. In 1968 he appeared as Dr. Hill in "Rosemary's Baby" and 2 years later was cast in a small role in Mike Nichols film version of "Catch-22". (that same year he also briefly starred in BJF's off-Broadway play "Steambath", replacing Rip Torn, the role eventually going to the show's director Anthony Perkins). Grodin had earlier been under consideration for the lead role in "The Graduate".

Grodin was 37, balding and a bit paunchy when he was cast as the twenty-something Leonard Cantrow. He trimmed down, grew long sideburns, was fitted with a bushy dark toupee, and delivered a superb comic performance and, actually achieves something rare in movies: He plays a guy who does something so reprehensible and cringe-inducing and still gets the audience on his side, cheering his eventual triumph. You just had to admire the guys chutzpah. Even so, when at one point in his frustration he announces "And... I'm a SCHMUCK!", audiences inevitably broke out in applause.
Cybill Shepherd delivers a sexy, subtle and funny performance as Lenny's WASP/Shiksa/Dreamgirl/All-American Goddess Kelly, at first flirty, then disinterested, unattainable and finally... attainable
To me, the true success of a film has always been whether it was worthy of being parodied by MAD magazine. Sure enough, The Heartbreak Kid passed the test and received the full-throttle, seven page MAD treatment in their Oct 1973 issue (OK, Mad wasn't always the most timely publication) with a funny script by Larry Siegel and beautiful art by the master himself, Mort Drucker...

In 2007, A party at New York's Le Cirque was held to celebrate Charles Grodin's new memoir and the 35th anniversary of "The Heartbreak Kid" attended by several of the cast members and talents behind the film: (photos by James Hamilton for the NY Observer)

Post script: In 2007 "The Heartbreak Kid" was, for some unfathomable reason "remade" with the son of Jerry Stiller and Anne Meara in the lead and written & directed by two men named "the Farrelly brothers", clearly none of them having any understanding of what made the first film great. The "remake" was an abomination and thankfully a huge flop. Avoid at all costs. Hopefully "the Farrelly brothers" will never again attempt to "update" classic movie comedy... 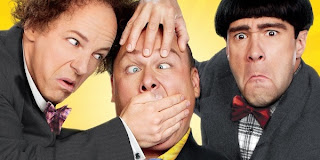