A film documentary, VERMEER OF THE BORSCHT BELT is being planned about  me and my work. It'll include interviews as I discuss my adventures and mis-adventures as a cartoonist/illustrator, as well as interviews with many fellow cartoonists and friends, including comedians, writers, broadcasters and some human beings I've drawn over the years. A Kickstarter campaign has launched on it's behalf. The filmmaker, Kevin Dougherty, a recent guest on Gilbert Gottfried's Amazing Colossal Podcast, is an extremly talented music video filmmaker, animator,  and pop culture expert. He's also a long time admirer of my work and has been planning this film for several years.

Kevin and I first met 20 years ago when he hired me to create the art for a CD-ROM (remember those?) he was packaging for Simon & Schuster. We're remained friends ever since. Please help him out with his project by making a donation, small or large, and in exchange, DVD's, limited edition signed movie posters, signed prints and executive producer credits are being offered.

boingboing on the projected documentary:


Drew Friedman is one of the best illustrators alive today. His work has appeared on the cover of MAD, Spy, and The New Yorker and his recent books about comic book heroes and Old Jewish Comedians will go down in history as masterpieces.
I'm glad someone is making a documentary about Drew, called "Vermeer of the Borscht Belt." Kevin Dougherty is asking for $50k on Kickstarter.
http://boingboing.net/2016/11/16/upcoming-documentary-about-art.html

On Friday, 11/18, Drew Friedman will be in conversation with pop culture journalist
Ben Schwartz at Meltdown Comics, 7522 W. Sunset Blvd, on Friday, Nov 18th at 7 PM,
as they discuss and present images from Friedman's latest book "More Heroes of the Comics" (Fantagraphics). A book signing will follow. 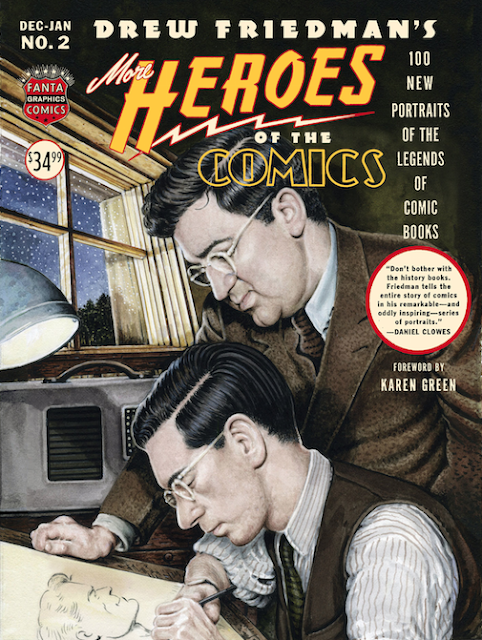 Posted by Drew Friedman at 9:22 AM No comments: