In the mid-seventies,  attempting to reach an older demographic, Topps chewing gum created "together" chewing gum, targeting young, me-generation couples on the go. Clearly someone at Topps had a hunch that a "tingling" cinnamon chewing gum would be just the aphrodisiac young couples desired. The product was tested but ultimately not released.

Several designs were created, here ar two from my collection: 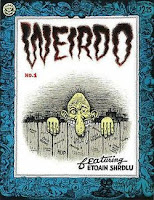 Some Funny Re-Casting On The Way To The Forum...

A Funny Thing Happened on the Way to the Forum opened on Broadway in 1963 starring Zero Mostel, who also starred in the 1966 Richard Lester film version.

The show has been revived many times over the years with various stars in the lead role, among them Nathan Lane, Whoopi Goldberg and recently Frank
Ferrante.

Here are some of the other stars and casts of broadway, touring and lesser-known productions of the show...

Thanks to John Wendler and to Tor Lier, John Schrank, Frank Santopadre and James Mulholland