BLACK HUMOR was a 1965 Bantam paperback anthology of short stories and excerpts from novels by celebrated "black humorists" of the day, including Joseph Heller, Terry Southern, Vladimir Nabokov, Thomas Pynchon, Edward Albee and many others,  edited by my father Bruce Jay Friedman, and including his short story "Black Angels". I've always loved this cover, although, first subjected to it at age of six, I had no idea what the hell was going on. A couple talking via word balloons inside a closed coffin? A bra hanging out?? What could this mean? This was not MAD magazine! Actually, It still confuses me.

From the books opening page:

"THE WICKEDEST COMEDY EVER PERPETRATED ON THE AMERICAN SCENE!"

the phrase "Black Humor" (Not BJF's title, the book was already titled when he was hired as it's editor) evolved from "black comedy" and "gallows humor", a "dark humor provoking discomfort". From BJF's foreword attempting to describe this new literary genre: "A nervousness, a tempo, a near hysterical new beat in the air, a punishing isolation and loneliness of a strange, frenzied new kind".

BJF was never comfortable with the possibly misleading literary label "Black Humor", preferring "Tense Comedy", a phrase he later used in 1967 as a subtitle for his off- Broadway play "Scuba Duba".  Here he discusses Black Humor and other topics with Mike Sacks for his book of interviews with celebrated humor authors "And Here's the Kicker": 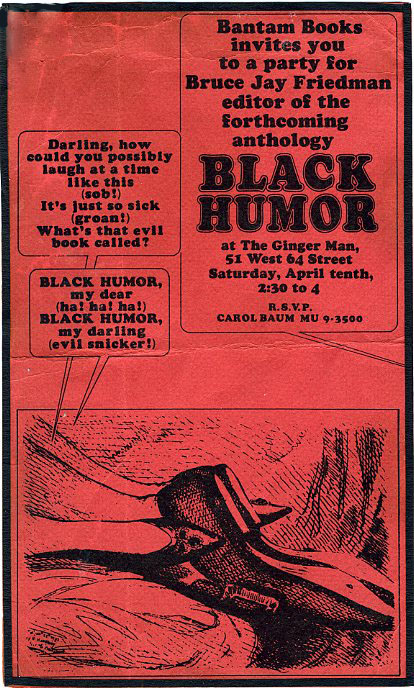 The invitation to the books publication party at the Ginger Man restaurant in the summer of 1965. The (1792!) illustration used is titled: "Fashionable Contrasts" by James Gillray. Sadly, my 2 brothers and I did not attend the party. 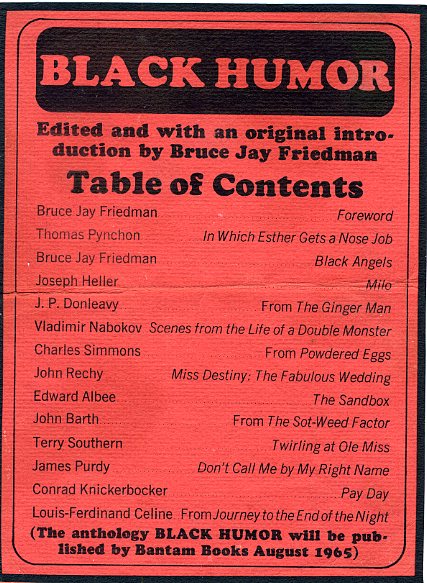 Part two of the party invitation, listing the book's table of contents. 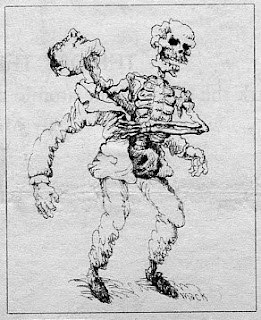 The supplement BOOKWEEK in the now long-gone New York Herald Tribune reprinted BJF's foreword to the book, accompanied by this illustration by renowned cartoonist Stan Mack.


In 1969, Bantam reprinted Black Humor as a "Bantam Modern Classic" with this new, even more disturbing (to a 10 year old) cover, based on a portion of "Hure Und Kriegskrupper" by Otto Dix.
Posted by Drew Friedman at 12:06 PM