An Afternoon with Joe Franklin

On a recent Wednesday afternoon, I,  along with some of my chums, had the pleasure of visiting my beloved old friend, the one & only legendary broadcaster Joe Franklin at his Times Square office in NYC, before heading over to have lunch at the legendary Sardi's restaurant on W. 44th St.

This truly memorable "Super-Spectacular" visit with Joe was captured via my legendary iphone for posterity, and is presented here for your delight... my friends.

Thanksgiving miracles!
Craig Bierko tells us he believes there is “order in the universe” after his reverence for nostalgia king Joe Franklin led to the return of his lost wallet. Bierko, who’s starring in “Standing on Ceremony: The Gay Marriage Plays,” grew up watching Franklin on WOR-TV/Ch. 9 and when his friend, artist Drew Friedman offered to set up a lunch meeting with the 85-year-old showbiz legend a few months ago, the actor jumped at the chance. At their meeting, Bierko says Franklin gave him two gifts: his business card and diamond earrings for his girlfriend. (Franklin’s son is in the jewelry trade.) The actor was grateful for the gems, but, he says, the card meant so much to him that “if I could reduce it to powder and snort it into my brain I would.” Instead, he carried it proudly in his wallet — until he lost the billfold about a week and a half ago. Because the ID inside gave Bierko’s California address, he says he’d just about given up on its return when, last week, a friend of Franklin’s called to say the the wallet had been returned to the address on Joe’s business card. Bierko tells us he’s meeting with Franklin Monday to get his wallet back. That’s one for the Thanksgiving time capsule.
Read more: http://www.nydailynews.com/gossip/blake-lively-spotted-apartment-shopping-madison-square-park-rumored-place-beau-ryan-reynolds-article-1.983274#ixzz1f0mJcG25 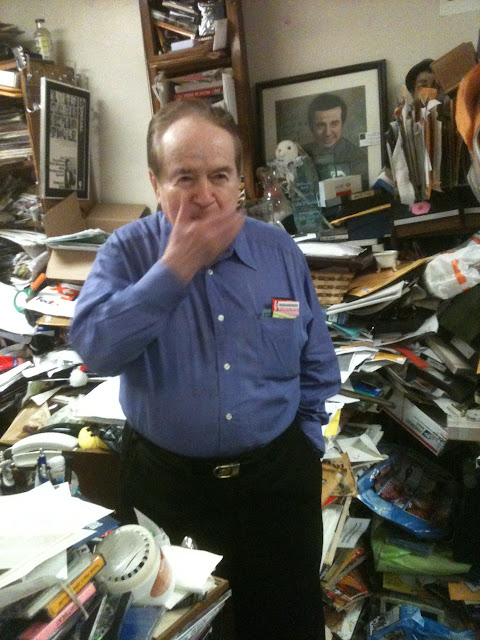 Joe welcoming us to his office. 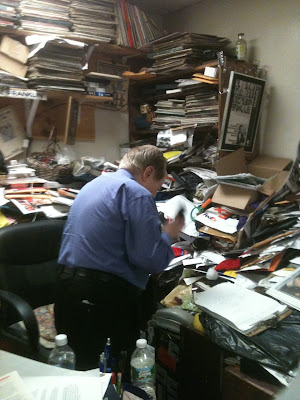 Joe pauses to do some paperwork

Posted by Drew Friedman at 3:41 PM