On Sat, Dec 3rd, I had the honor and pleasure, along with Fantagraphics book's Gary Groth, of interviewing one of my all time favorite cartoonist/illustrators, the legendary Jack Davis, as part of the Brooklyn Comics & Graphics Festival, in conjunction with the release of the new deluxe Jack Davis career anthology "Drawing American Pop Culture" (Fantagraphics). Jack is the quintessential laid back Southern gentleman, and true to form, was as delightful, sweet and humble as everyone expected. I chose the images shown for the power point presentation during our discussion of Jack's career, (see link), a daunting task, picking several dozen illustrations hopefully touching all bases of his career, from among the thousands he's created in his seven decades as an illustrator, and Jack happily discussed and reminisced over each drawing, including some he had long forgotten (or had tried to forget!)

All the images shown for the PPP:
http://drewfriedman.blogspot.com/2011/11/jack-davis-sampling.html

You can listen to our entire interview with Jack here:
http://www.tcj.com/jack-davis-in-conversation-with-drew-friedman-and-gary-groth/#.Tw9UlMWHbjo.facebook

Some highlights of our talk: Jack credits his friend, the brilliant EC war comics and MAD editor Harvey Kurtzman as the "greatest, smartest editor" he ever worked for, pushing him in directions that he still credits for his long, astounding success as a comics artist, editorial illustrator, album cover and film poster artist, etc. He also shared fond memories of his old friend, "The Mad Playboy of Art", Will Elder, laughing over many of Elder's practical jokes  (Groth asked Jack if he was ever fell victim to any of Will's pranks? Jack:"Nope!") and recalling he had film footage of Elder swimming in the sand.

Jack talked about how much his wife hated the more depraved EC horror comics (Tales from the Crypt) he was creating in the early/mid-fifties (Jack is an admitted Universal classic horror film buff), and that he finally quit drawing "The gruesome stuff" when his kids got a bit older and became more aware of their dad's work. 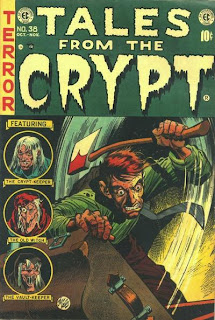 He also seemed to welcome the demise of the horror comics trend,  (Gary and I reminded and thanked Jack that his EC horror comics have now warped several generations of children, including ourselves) and sure enough, his later monster images were mostly drawn with lighthearted humor. 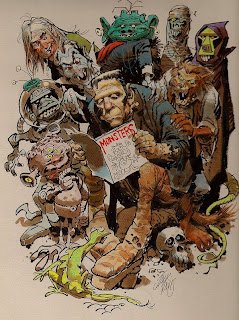 I repeatedly questioned Jack as each image popped up if he had ever met or even heard from any of the celebrities/movie stars he had drawn over the years for film posters, album covers, magazine covers, etc and he said no, none, except for one lone encounter with Woody Allen, (Jack had created the poster art for "Bananas"), in an elevator; "Woody wouldn't even look at me". When we showed his Jackson Five "Ebony" cover from 1970, He told of being flown to the Jackson Five's ranch after being hired to design the J5 for their Saturday morning cartoon series, but alas, they were on tour when he got there. He only dealt with their father Joseph and their agents. I asked "You didn't even get to meet... TITO?"

I enquired if Jack was a Howard Stern fan, as he had drawn a popular subway poster depicting the WNBC Howard Stern radio show cast in the early eighties that we also showed. Jack admitted he wasn't a Stern fan, much preferring Imus, (Jack also created an Imus WNBC radio ad, as well as some of his early album covers).

I told Jack that at the time, Howard was thrilled by the poster and would rave about it on the air, having been a rabid MAD magazine fan in his youth. Howard's mom also hung the poster in her living room for years, a photo of which can be seen in one of Howard's books. Jack was completely unaware of this, (and probably wasn't that much interested). 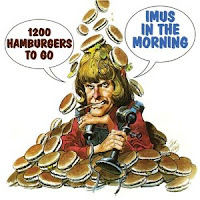 We asked Jack if he ever watched the movies he was asked to do posters for and he said "rarely". I assured him that among the dozens of films he created posters for, "Horror Hotel", from 1960 and filmed in Britain, was actually a very good, creepy little horror film dealing with a New England witch's coven, though there was absolutely NO image in the film that equaled his frightening poster artwork for it. 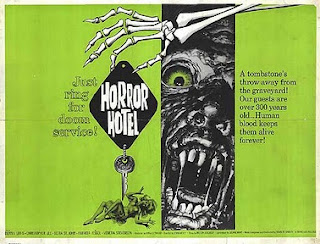 He did admit enjoying "It's a Mad, Mad, Mad, Mad World", especially the fact that Jimmy Durante died at the outset. He said he'd never seen the Jerry Lewis directed "One More Time", his poster image which we showed, nor the prequel "Salt & Pepper" both starring former rat packers Peter Lawford and Sammy Davis Jr., which he also created the poster art for. I told him both films were stunningly wrongheaded, but fascinating just the same, which confused him somewhat. 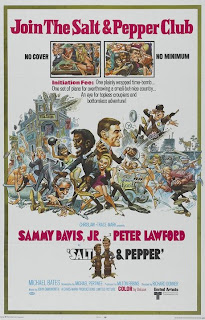 Gary and I asked Jack about his working habits (Jack has long been known as the "fastest illustrator in the business") and he explained that his regular routine was to shut himself inside his studio in the morning, turn up either country or bluegrass music, and "get the job done", usually in time for the messenger to pick up the art and to get out onto the golf course by mid-afternoon. Incredible!

Jack discussed receiving his first TIME magazine cover assignment in 1972, depicting Joe Namath surrounded by other football players. He originally sketched "Broadway Joe" surrounded by sexy, bikini-clad ladies, but the art director asked for the last minute change, removing the babaes. At the time, Jack was totally thrilled to  be asked to create a TIME cover ("I thought I REALLY ARRIVED!"), assuming it would be his one and only, little realizing he would go on to create 35 more, becoming the most prolific TIME cover artist of the seventies. He mentioned his proudest moment ever as an artist was receiving a hand written note from then President Ford, thanking him for the"Trying to Fight Back" TIME cover art Jack had just drawn featuring Ford. 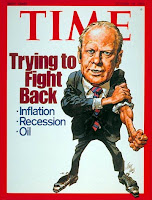 He admitted his favorite TV Guide cover of the more than two dozen he created was the Bob Hope Academy Awards cover from 1970. He also discussed creating his very first job for TV Guide in late 1965, an epic, mind-boggling eight page spread showcasing NBC's upcoming 1966 color lineup, Jack's "Sistine Chapel" as we pointed out. I asked him how long that took him to do and he modestly answered "Oh, about a week".

Jack has produced such an overwhelming amount of artwork over the years that  inevitably, he has no memory of working many of the illustrations he's created, including several of the images we showed: the late sixties poster art for the Jerry Lewis film "Way... Way Out" ("did I do that?") and the more recent cover for the Smithereens CD "B-Sides the Beatles".

Our talk with Jack was SRO, many not even able to get in the door and Jack was visibly touched by the crowds and their enthusiastic response for him, almost moved to tears.

Thanks to the festival organizers Bill Kartalopoulos, Gabriel Fowler and Dan Nadel. Special thanks to Gary Groth and Jack Davis