A Visit to MAD Magazine


In 1974, when I was 15, I was fortunate to spend the afternoon visiting the MAD Magazine offices on MADison Ave.  I was a longtime (almost obsessive) MAD fanatic/collector, and fantasized about someday joining the ranks of "The Usual Gang of Idiots" as one of their contributing artists. I had also amassed a large collection of EC comics, the original publisher of the MAD comic book. 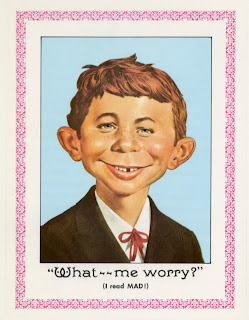 My dad, who shared some mutual friends with MAD, (and EC), publisher William M. Gaines, pulled a few strings and arranged for my visit. I had witnessed Gaines at various NY comic book conventions and at some evening functions at my high school Baldwin (His son Chris, two years younger than me was also a student there, and a pal) but this would be my first actual encounter with the legendary publisher.

I somehow got the day off from school and was pretty nervous when I arrived at the MAD offices at 485 Madison on 52nd St, but was welcomed by a friendly female receptionist who ushered me right into Bill Gaines office.

Gaines, 52 at the time, was a large bearded man with long, gray hippie-like hair, (legend has it that the newly divorced Gaines, who sported a crew cut up until the late sixties, woke up one morning and decided he no longer wanted to shave or have his hair cut. The rest is history), hugely fat with loose-fitting, sloppy clothing-- quite the jolting sight and intimidating at first, but he instantly put me at ease by enthusiastically shaking my hand and enquiring about my artistic goals. 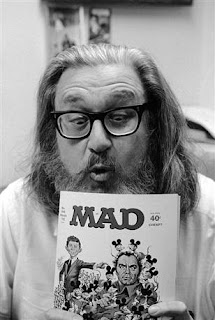 I brought some samples of my drawings to show and he politely thumbed through them and told me he thought I had some talent but needed to attend art school after high school. He also mentioned how much he enjoyed my father's books and plays.  He spoke with a strangely deep, muffled, garbled voice, but had a loud, infectious laugh. He was instantly likable, like a wacky eccentric fat-hippy-uncle.
Bill Gaines office was a cluttered, messy mini-museum, filled with Zeppelin artifacts (he was obsessed with dirigibles, King Kong and the Statue of Liberty), a human skull (which he told visitors belonged to his father), stacks of MAD's and new EC comics book collections and comic fan magazines (Squa Tront, etc). Instead of a view of the New York skyline, his lone office window had a giant King Kong head peering in...
Amongst the debris and wall decor there was of course a lot of MAD and EC items, including 3 large framed color paintings above his desk depicting the three EC horror mascots, the Vault Keeper, the Crypt Keeper and the Old Witch, all of which I stared at up close for several minutes:
Gaines was clearly a busy man that day, at least a little too busy to spend a lot of time amusing a nervous long haired 15 year old, so he attempted to go about his regular business on the phone, also going over artwork and scripts, and instructed me to make myself at home at MAD and feel free to wander around the offices and say hello to everyone, but to make sure to come by his office to say goodbye before I left.
Meet the Staff of MAD on record:
http://www.youtube.com/watch?v=-zMMYWFY2BA

I had my hopes high that I'd get to meet some of the MAD artists on my visit, especially some of my heros who I knew lived in New York, including Mort Drucker, Don Martin, Sergio Aragones and Al Jaffee, all cartooning Gods to me.

Based on so many of the contributing artists and writers posing in MAD's parody ads over the years, my assumption had always been that the "the Usual Gang of Idiots" basically hung out at the MAD offices, it being their "official clubhouse", creating their work there, an ongoing cartoonist community, not taking into account that the artists actually created their work at their homes, mainly in the suburbs, then dropped it off at the MAD office.

The fact was that many of the artists and writers would actually travel in to deliver their finished work in person because MAD (uniquely) paid contributers instantly, (I'd come to learn this later).  Bill Gaines famously supported camaraderie among his MAD contributers which included inviting all the regular artists and writers on an exotic overseas vacation every year.

Departing Bill Gaines office, the next office door along the hallway belonged to longtime MAD editor Al Feldstein...
Al Feldstein was a comics legend to me, an early EC comics artist whose stiff, retro style of comic art I loved. He had also been the editor/writer, (along with Gaines and others) of the EC horror, science fiction and crime comics, and MAD's editor since it's founding editor and writer Harvey Kurtzman had famously left (after editing the first 26 issues) following a dispute with Gaines. It was the Feldstein edited MAD magazine of the sixties which were my monthly bibles.

I was excited to finally have the chance to meet Al Feldstein... or, so I thought. His office door was slightly ajar so I stuck my head in and said "um... hello Mr. Feldstein, I'm here visiting the MAD offices for the day and Mr. Gaines told me to introduce myself to everyone...". He (unsmilingly) looked up at me for a split second, glared, said nothing, and went right back to his paperwork, clearly having zero interest in anything to do with me. I waited a few seconds for him to say something... anything, but nothing came, so I slowly backed out.


The next office I stuck my head into (this time with some slight hesitation), belonged to MAD associate editor Nick Meglin. My visit with Meglin was brief, he was also clearly busy, (and on the phone), but, not knowing anything about me, he couldn't have been friendlier and more charming, even taking the time to look at my drawing samples and suggesting that I think about going to art college after high school.

Nick's book "The Art of Humorous Illustration" was essential reading and viewing for me so I took his words to heart, and would enroll at the School of Visual Arts three years later where Nick taught a night class, and he became one of my favorite (and funniest) drawing instructors.
I wandered into the art department and instantly recognized the portly art production head Leonard Brenner from all the appearances he'd made in MAD ad parodies over the years. Brenner, was known affectionally as "the beard" for obvious reasons.

He was in the middle of laying out some pages, but took the time to engage me while he was working and explain to me what he was doing. Also wandering around in the art dept was associate editor Jerry De Fuccio, whose handsome, distinctive Italian face I also recognized from many MAD ad parodies.

De Fuccio was charming and conversed with me a bit and it soon became clear to me that he had been briefed by Bill Gaines about my visit. He went on about how much he admired my dad's writing.

John Putnam, the art director, whose face I also knew well from the ad-parody pages of MAD, with his disheveled white hair had the appearance of an absent minded college professor... he actually reminded me of a combination of Wally Cox and professor Irwin Corey. Putnam was intrigued when he learned I wanted to someday work for MAD and took some time to rummage through my drawings.

Rather than simply appeasing a 15 year old wannabe cartoonist, he was blunt, strongly suggesting that I needed to "slow down", stop incessantly drawing "funny faces", and especially concentrate on anatomy by taking figure drawing classes, again advice I would faithfully follow through on.

Then, suddenly, into the art dept walked none other then the one and only... Sergio Argaones, MAD's king of "Marginals" and possibly the happiest, friendliest cartoonist I've ever encountered, then or now. I was thrilled to be in his presence. Sergio greeted me like I was a star and carefully studied (and even laughed) at my stack of drawings, and would also offer me sage advice on how to someday become a MAD artist ("Work hard... draw funny!"), and couldn't have been more encouraging to this kid he didn't know.

He even sat down and drew this cartoon for me on the handy MAD stationary , managing to squeeze in an Alfred E. Neuman, a reference to "PLOP!, (a DC  humor comic book he was contributing to at the time), and the three EC-like horror mascots he was then currently drawing for "House of Mystery" comics...

Receiving this drawing from Sergio was the highlight of my visit. It still hangs on my wall. My hope at the time was just to be able to encounter at least one of the legendary " usual gang of idiots" and I certainly wasn't disappointed. I returned to Bill Gaines office and thanked him for his staff's hospitality and told him what a fun and rewarding visit it was for me. He presented me with this (cheap, crummy and now creased & banged-up), souvenir poster and sent me on my way.

Postscript: 18 years later, I'd receive a call from MAD editor John Ficarra inviting me to illustrate a (test) page for them. After graduating from SVA, I hadn't attempted to become a MAD contributer after all, instead setting my sights on National Lampoon, Heavy Metal and more "underground" type publications such as RAW and R. Crumb's WEIRDO, before turning to more mainstream publications. But when the call came in from Ficcara who told me he was a fan of my work in SPY and the NY Times, I happily accepted the offer. I suppose I passed the test because I've gone on to create hundreds of pages of art for MAD, joining the ranks of the "Usual Gang of Idiots", a childhood dream fulfilled.

Among my many contributions to MAD was this parody of the then popular Joan Osborne song "What If God Was One Of Us?". The MAD editors decided that the perfect stand-in for GOD would be... the late William M. Gaines himself, who had  died several months earlier.

A perfect stand-in for GOD: 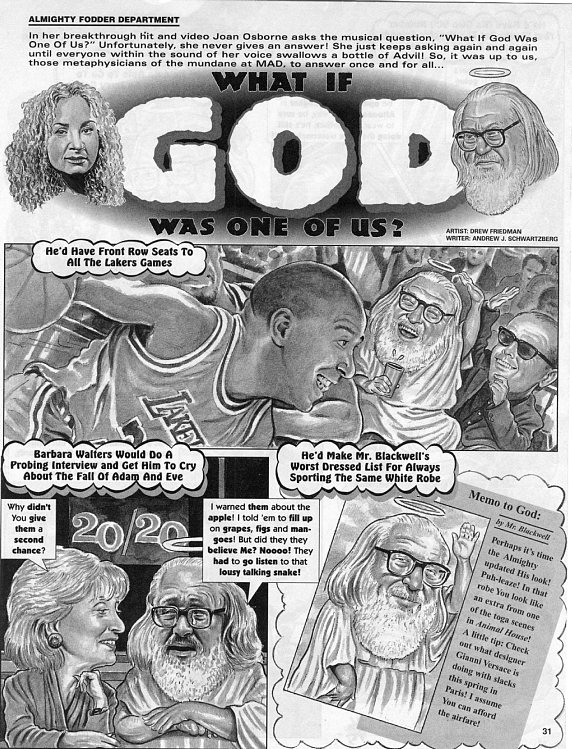 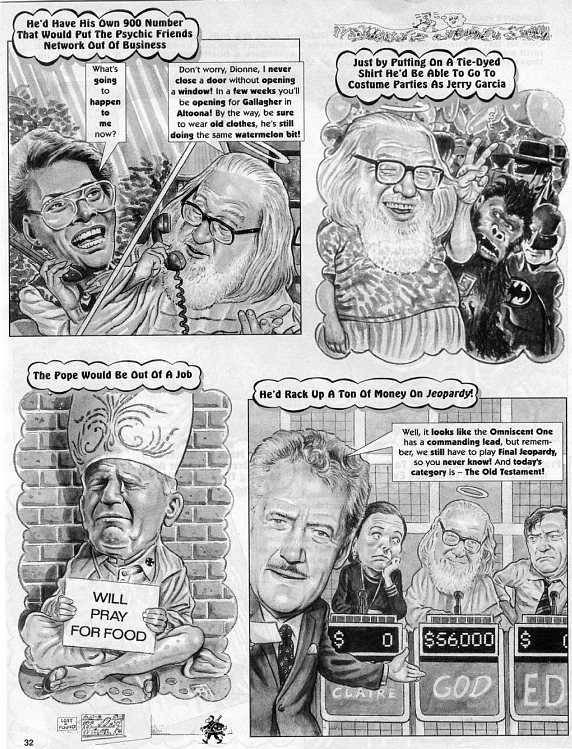 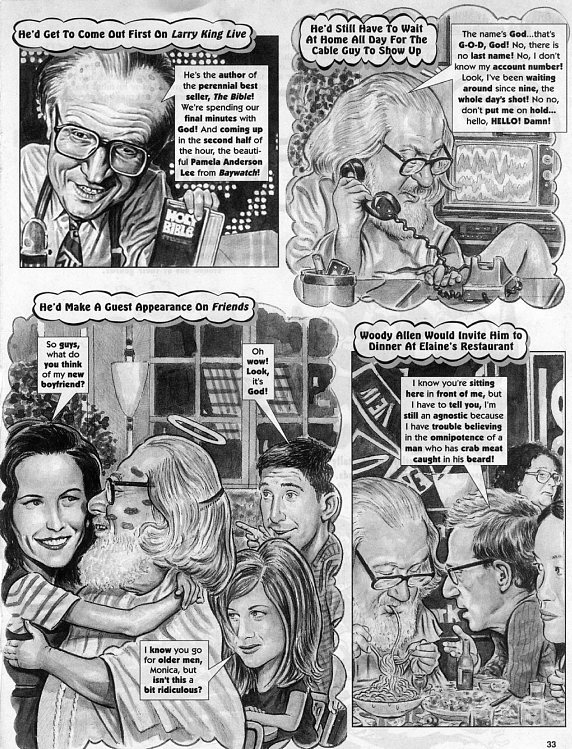 Learn all about MAN BOOBS:
http://drewfriedman.blogspot.com/2012/06/mad-guide-to-man-boobs.html